What are the factors or elements for 487 PC Grand Theft?

Under California law, the crime of theft is defined as the unlawful taking of someone else’s property.

And when the property taken is valued at more than nine hundred fifty dollars ($950), then the theft is considered the California crime of grand theft under Penal Code 487 PC.

A grand theft conviction on your record can have all sorts of professional and personal repercussions. And, unfortunately, the California grand theft statute allows grand theft charges to be filed against people who made one or two mistakes that, at the time, seemed minor.

Examples of actions that can lead to grand theft charges in California include:

In most cases, the offense of grand theft in California is a wobbler.  This means that the prosecutor may choose to charge you with either misdemeanor or felony grand theft.

The maximum potential sentence for misdemeanor grand theft is up to one (1) year in county jail.

For felony grand theft, you may be sentenced to sixteen (16) months, two (2) years, or three (3) years of incarceration. 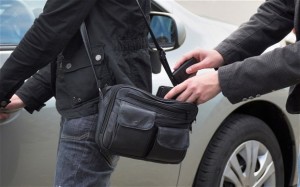 How can we defend you against charges of California Penal Code 487 PC Grand Theft?

In a typical grand theft case, popular and often effective defenses are that: